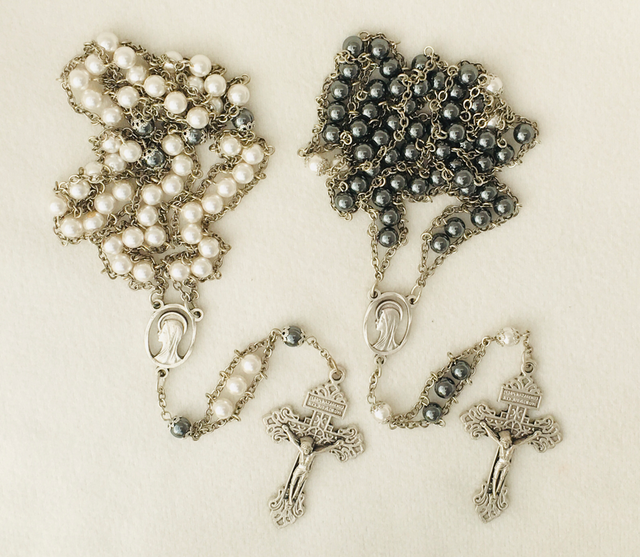 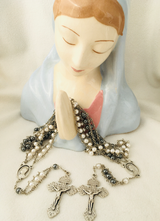 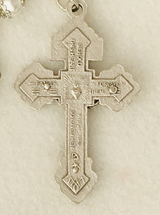 Do you pray for your spouse? Many of the saints have done so and we here on earth, part of the Church Militant, should also! It's a wonderful practice to engage in. These rosaries would be perfect for a young couple just starting out or for an anniversary gift for you & your spouse or perhaps your parents or grandparents!

Hers is created with Swarovski Crystal Pearls and his is created with hematite. I've used the opposite beads for the Paters on each to interweave prayer for the other person on these special rosaries. I've completed these rosaries with the highly indulgenced Pardon Crucifix.

The History of the Pardon Crucifix

“The Pardon Crucifix was introduced at the Marian Congress of Rome in 1904, with the support of his Eminence Cardinal Coullié, Archbishop of Lyon. It was through the discourse made to him by the Frs Lémann that the crucifix obtained general approval. The project of a union around this Pardon Crucifix was presented to His Holiness by the most Eminent Cardinal Vivès, president of the Congress.

“The historic and sacred inscription of the royalty of Jesus appears in inscription placed over the head of Christ [on this crucifix]. It is an irrefutable witness against the denials and audacity of impiety. There is preserved at Rome, in the Basilica of the Holy Cross of Jerusalem, the actual inscription of Golgotha recovered by St Helen.

The written relic is not complete; there may have been a division, and also age has considerably reduced it. Two words, only two words shine forth, respected by time, Nazarenus Re, The Nazarene King. It is a prophecy written on wood: all royalties are passing, except that of the Nazarene.

“On the reverse of the cross, at the center, the Sacred Heart shines forth with two inscriptions recalling the tender mercy of the Saviour; one is a prayer of pardon, breathed forth in the agony of Calvary: Father, forgive them; the other is the prayer of love breathed forth against ingratitude, in the sanctuary of Paray-le-Monial: Behold this Heart which has thus

“Below, the figure of Our Lady surmounted by a star occupies the foot of the cross, which is truly the place of Mary. She stands there to say to every straying soul: ‘Do not forget the sorrows of your Mother’. She says, ‘I am the comforter’. Despair murmurs that it is too late; She says: ‘between late and too late there is an abyss, behold all the Blood of My Jesus, behold My motherly devotion for you’.”

Whoever carries on his person the Pardon Crucifix, may thereby gain an indulgence.

For devoutly kissing the Crucifix, an indulgence is gained.

Whoever says one of the following invocations before this crucifix may gain each time an indulgence: “Our Father who art in heaven, forgive us our trespasses as we forgive those who trespass against us.” “I beg the Blessed Virgin Mary to pray to the Lord our God for

Whoever at the moment of death, fortified with the Sacraments of the Church, or contrite of heart, in the supposition of being unable to receive them, will kiss this Crucifix and ask pardon of God for his sins, and pardon his neighbor, will gain a Plenary Indulgence.

His Holiness Pope Pius X, declared that the Indulgences attached to this Pardon Crucifix are applicable to the Holy Souls in Purgatory.

The Pardon Crucifix; Powerful with God!"

Sacred Heart of Jesus (back)